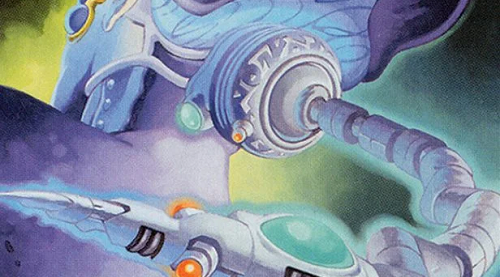 Oracle was put on the watchlist in August last year when we wrote: “Right now it [c]Thassa’s Oracle[/c] is only seen as a sidekick (although a very powerful one) but in reality it has the potential to be the main gameplan aswell and we want to be prepared for that instant.”
Since then Oracle, paired with Tainted Pact, has shaped the meta to a point where it slid into almost any deck that could cast the combo. The fact that the game-winning trigger can not be dealt with via creature removal narrowed the amount of playable interaction down to a point where blue based tempo decks had no longer to worry about their green based creature midrange matchups because those decks had basically become unplayable at the top level.
For it’s continuous influence on wraping the meta we have decided to ban Thassa’s Oracle.
For more information about our approach towards combo decks see the respective passage further down in this announcement.

We had once more a closer look at the banned list and the feeling grew, that some of the cards have been on the list for so much time now, that it is very hard to evaluate them in the current, much stronger, metagame. This holds for Jitte as well as for Skullclamp and to some extend also for Mindtwist. The idea, as announced in the previous Announcement, is the following.
As currently less competitive tournaments happen, we want to use this as a trial period for potential unbannings. This means the following cards will be unbanned for 6 Month until the next banning Period. The default for those will be that they get banned again after this time. Of course they will be voted again to keep them unbanned without limitation. Additionally be aware that non of those cards would have been unbanned in the normal procedure this time. Your feedback is required here to evaluate the influence of these cards and of course we want your opinion on the option to unban cards for a limited amount of time.

Skullclamp:
Creatures in play are a pretty valuable asset in contemporary Magic games and more and more cards, in particular creatures, provide card advantage just by themselves. Moreover wrath effects play a pretty minor role already. Combined with the fact, that Skullclamp doesn’t provide an advantage in the crucial early game, we think that Skullclamp is weak enough to test her temporary unban. This said, we believe that Skullclamp is still a strong card, however not as dominating as 17 years ago.

Umezawa’s Jitte:
While this surely is a strong card, creatures have become much bigger these days and hence you can’t kill them as quickly. This is also a card, that might not find the way into your 15 creatures Uxx aggro-control deck, because you might end up without any creature on the board for some time. Finally answers in the form of Abrupt Decay and Assassine’s Trophy are more present today. Overall, we think, we should give her a chance after all these years in the dark cellar.

Max / Bobz0rd leaves the Council. We thank him for the time and commitment that he has made available to us and we wish him all the best for the future.

At the same time, we are happy to announce our new Council member Justus / hoylt, who has decided to join us from now on. Justus has been known for his regular tournament presence for many years. Beside of his current work on his podcast project he was particularly noticeable because of his always friendly and fair dealings with other community members. We looking forward to work together in the future and thank Justus very much for his support.

Tutors in Highlander:
The tutor topic is one of the longest ongoing discussions in the community. We discussed this topic intensively in the past few month and came to the conclusion that tutors belong to the Highlander format, even though its singleton approach on MtG. This means we dont think there is the need to ban more tutors and we want to focus more on other parts of the deck construction to keep balance in the format. In our opinion tutors that have the worst influence on the format are already banned, and currently there is no need to ban more in the ever accelerating deckplans. However, we will of course come back to this discussion every now and then and closely observe the influence of tutors, especially in the connection with combo decks.

Combo-Decks:
With the rising of powerful, fast combo decks we came to the conclusion that we of course want to keep combo decks in the format. However, these should not be combo’s that are simple to set up, universally usable AND fast. This means we want to restrict “two-card combos” that can be reliably played in non focused decks and lead to wins reliably in the very first turns. As an example Thassa’s Oracle combo can end the games very fast in addition to be playable in a lot of non-combo-focused decks. What we want to keep in the format are combo decks that on the one hand both need specific set ups and decks built around them to work and on the other hand allow for interactive games with decisions for both players.

We want to stress again that we need your input, worries and opinions on these changes and views on the format. So please do not hesitate to contact any of us via private message or just start a topic in the forum.

New Perspectives – A forum on the current state of Highlander