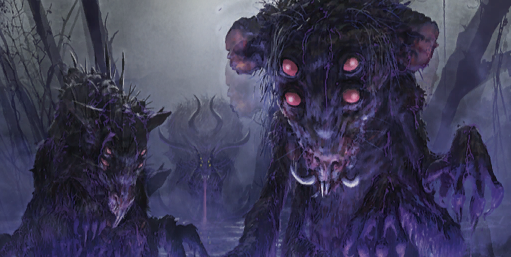 This Friday May 15th 2020 is the official release date for Ikoria: Lair of Behemots and with it a lot of exciting new cards become available to play in Highlander.
A lot has been said already about future format staples, the Triomes, or potentially powerful cards like Fiend Artisan, the new Planeswalkers or Lurrus. I therefore won’t bother writing about these cards here because so much has been talked about them already and I don’t feel like I would be offering anything particularly new or interesting.
Instead I want to take a closer look at the Commons and Uncommons of the set that, in my opinion, will see Highlander play. They might not be as flashy as the Rares or Mythics but nonetheless will have an impact on our format.
Without further ado, here are my top 10 Ikoria Commons/Uncommons:

10. Ominous Seas
I am sure this card wouldn’t warrant an inclusion if it was just for the fact that you can make a big Kraken turn 11. Luckily, we have an abundance of card draw in this format and especially with cards like Timetwister or Wheel of Fortune Ominous Seas can unleash a sea monster rather quickly. The main reason to put this card on my list though is the interaction with Greater Good. If you happen to make one Kraken with Ominous Seas you will be able to draw your entire library and winning from there shouldn’t really be a problem.

9. Footfall Crater
This unassuming enchantment can speed up anything from reanimated fatties to Eldrazi that were put into play with Show and Tell or Oath of Druids. Personally, I will try Footfall Crater with Hermit Druid to win the same turn I play it.

8. Boon of the Wish-Giver
6 mana for sorcery speed draw 4 is on the lower end of mana-to-card output. Boon of the Wish-Giver has the huge advantage that unlike other late game card draw spells it is not being stuck in your hand early on because you can just cycle it for the very low price of one mana. It is also not vulnerable to graveyard hate or the diminishing returns of running multiple delve spells like Dig Through Time and Treasure Cruise alongside Gurmag Angler and Tasigur, the Golden Fang. Quite the contrary, Boon can fuel these cards if you cycle it early and is therefore less of a burden on your gameplay.

7. Bastion of Remembrance
This is another nice payoff card for Aristocrats style decks. 3 mana for just one 1/1 is pretty expensive but the ability is not attached to the body which is quite convenient.

6. Memory Leak
3 mana is quite expensive for a discard spell but it has the added value of functioning as a piece of graveyard interaction and can cycle for just one mana if neither is needed. If you are up against a lot of combo and graveyard centred decks and want more interaction (and have already included Cling to Dust) Memory Leak might be the card for you.

4. Migration Path
This is one of the better cards printed for ramp strategies like Scapeshift or Bant ramp.
How many more times are you comfortable with reading that cycling makes cards like this playable?

3. Easy Prey / Heartless Act / Blitz of the Thunder-Raptor
Okay, I am cheating a bit here because I am actually including 3 cards on place 3 but they are all removal spells so we are good right?

Easy Prey gets a nod because it is a removal spell that checks both the boxes for Deathrite Shaman as well as Scavenging Ooze. And you know, one last time: Cycling.

Heartless Act is certainly the one that will see most play out of the 3 cards. Although it sometimes will fail to kill Scavenging Ooze it is not limited by converted mana cost of its target and has a very neat interaction with your own Thing in the Ice!

Blitz of the Thunder-Raptor gives Blue Moon decks a nice removal spell that can take care of a resolved Planeswalker, something that can be troublesome to deal with right now. It is also a clean answer to cards like Kitchen Finks which is a nice bonus.

2. Call of the Death-Dweller
I am very excited for this card as it singlehandedly reanimates the Cephalid Illusionist + Nomads en-Kor combo. But even if you are not returning any combos (or you know, just Hermit Druid) it is a pretty powerful tool for any creature-based strategy as it provides card advantage and boosts your creature with a deathtouch and a menace counter!

1. Sprite Dragon
Even if this was a Top 10 Ikoria list with no rarity restriction Sprite Dragon would be on it. This is a cheap evasive creature that grows to epic proportions rather quick. I have no doubt that we’ll be seeing a LOT of this Faerie Dragon in the future!

With 7 out of 12 cards on my list having Cycling it is pretty clear that I rate this ability very high. Usually running situational cards can be a liability but when you have the opportunity to cash them in for a redraw their inclusion feels much safer.

Did I miss any major card you think is going to be viable in Highlander? Did I overrate something you think is not going to see the light of day in our format at all?
And last but not least: What are the Commons or Uncommons YOU are most excited about in Ikoria?

Discuss in our Forum
Or at Facebook: European Highlander Group